My role in the coverage included:
Overall coverage:

I tweeted 11 videos/video interviews over two of three days. The Star’s staff tweeted my video about the unique things sold at El Tour expo on Twitter, YouTube and the Star’s website. My contributions were included as embedded tweets as part of the official race-day team coverage.

My article on a junior track star (shared to Facebook):


My Video: Created post-event recap for those who weren't there

Capitalized on a trending topic: Social media commentary about monsoon 2018 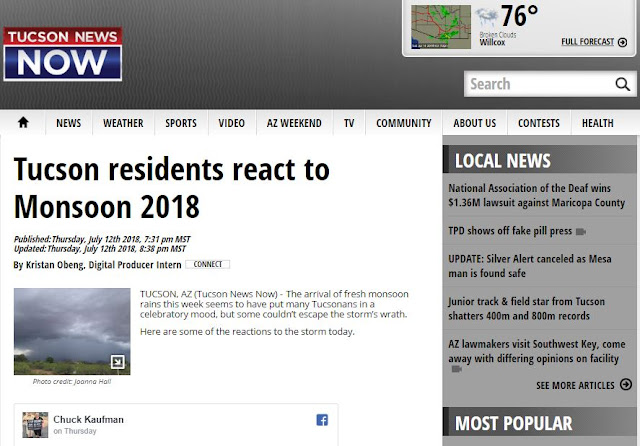 
2018 White Coat campaign (May through July)

Description: This campaign asked donors to sponsor the white coats of medical students in time for the 2018 White Coat ceremony. Click here to learn more.

My role in promoting the campaign included:
Facebook Live: My contributions to raising awareness of the campaign helped the live stream receive more than triple the reach of a previous streamed event, the 2018 Convocation.

Note: None of my posts were boosted. The reach and overall engagement was organic.


My Graphic and Photography:

Class of 2022 #MedCats wrote letters to themselves to be opened at graduation. In four years, these reflections will symbolize how far they’ve come since beginning medical school. Join us in wishing them luck tonight as they receive their first white coats!
A post shared by College of Medicine - Tucson (@uacom.tucson) on Jul 27, 2018 at 7:42am PDT


My Graphic and Photography:

While many Americans are surviving cancer more than ever, race, class and economic status continue to play a huge role on cancer outcomes, according to Heidi Hamann, PhD.
A post shared by College of Medicine - Tucson (@uacom.tucson) on Jul 11, 2018 at 10:34am PDT